Bayside’s history dates back to 2000 B.C.E., when the Matinecock Native American tribe first settled there. In the late 17th century, the area was settled by English colonists. By the middle of the 18th century, early settlers left their homes in Flushing and developed a farming community, Bay Side. During the Revolutionary War, the Bayside-Little Neck area suffered from raids by whaleboatmen from the Connecticut shores. In the 19th century Bayside was still mostly farmland. Middle 20th century urban sprawl in New York City, with the help of more convenient and accessible transportation, led to its development.

During the 1920s, many actors and actresses, such as Rudolph Valentino, lived in Bayside. At the end of the 19th and beginning of the 20th century Bayside saw an influx of people associated with the theater and movie industries. The town was then established as a colony for stage and screen stars. When rumors ran rampant through the acting community that Bayside would be the location of a new movie and production studio, many actors purchased homes in anticipation of an easy commute to the studio. However, this rumored studio never materialized. When Hollywood emerged as the capital of the movie industry during the 1920s, many actors left Bayside to pursue careers in California.[6]

Bayside was the site of a murder by Peter Hains, a prominent army officer, abetted by his brother, sea novelist Thornton Jenkins Hains, who gunned down prominent editor William Annis at his yacht club in 1908. The so-called “Regatta Murder” led to a widely publicized trial at the Flushing County Courthouse. Peter Hains was convicted of manslaughter and sentenced to eight years at Sing Sing, while Thornton Hains was acquitted.[7]

Bayside remains one of the safest and wealthiest neighborhoods in the borough of Queens. However, Bayside has been the setting to several organized crime incidents.

Michael Pappadio, of Bayside, was a mobster who worked for the Lucchese crime family in secrecy from his wife. He managed the Lucchese family’s interests in the Garment District of Manhattan. In 1989, upon a falling out with his superiors, he was murdered at a bagel shop called the Crown Bagel, on Rockaway Boulevard in South Ozone Park.[8] His wife subsequently reported Michael as missing. Three years later the FBI presented her with information about his death and his life in organized crime.[9][10]

In April 2002, Gambino crime family associate Darren D’Amico was shot in the leg outside of the Café on the Green restaurant in Bayside. It is speculated that Bonanno crime family associate Randolph Pizzolo was responsible for the crime. He was subsequently murdered on a hit called by Vincent “Vinny Gorgeous” Basciano. Basciano is now serving life in prison without parole.[11][12][13][14] 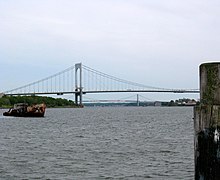 Throgs Neck Bridge between the Bronx and Queens

Bayside is bordered by the Bronx to the north across the Long Island Sound and Douglaston Manor across the Little Neck Bay. The eastern land border is the Cross Island Parkway and Douglaston; the western is Francis Lewis Boulevard/Utopia Parkway and Auburndale; the southern is Long Island Expressway and Oakland Gardens. The neighborhood of Bayside Hills is itself a newer subdivision within Bayside.

Bayside Gables is a privately owned gated community located near the Bay Terrace shopping center and the Little Neck Bay. Arguably one of the wealthiest areas in Queens (along with Forest Hills Gardens, Malba, Holliswood, Jamaica Estates, and Douglaston Manor), homes in this community can sell for as high as 4 million dollars.

Bayside Hills is a subdivision of Bayside’s south side, bordered by 48th Ave to the north, the Long Island Expressway to the south, 211th Street to the west, and Springfield Boulevard on the east. The homes in Bayside Hills have more value and are more upscale, many of which were built by Gross Morton.[15]

Bayside Hills is known for its thirty-three street malls and accents, especially the gatehouse (Bell Boulevard at 48th street), gateposts (48th Avenue from 216th Street) and Bayside Hills Street Clock (Bell Boulevard and 214th Street).[16] The Victorian style street clock sits upon the Leo Green Clock Mall, dedicated to the local civic activist. Further east, Captain William C Dermody Triangle Park (48 Avenue and 216 Street) memorializes Dermody’s abolitionism and service in the Civil War, leading him to be mortally wounded at the Battle of Spotsylvania Court House.[17] Much of the public green space is maintained by the NYC Parks Department and the Bayside Hills Civic Association.

The zip code 11364 is shared with Oakland Gardens.

Aerial view of Bay Terrace, with the Throgs Neck Bridge crossing the East River to the north

Bay Terrace is an affluent neighborhood[18] often considered part of the larger area of Bayside. The area encompasses gated cooperative/condominium developments such as the Bay Club and Baybridge Condos. Other cooperative/condominium developments include the Towers at Waters Edge, the Kennedy Street Quad, the Bayside Townhouse Condominiums, Bay Country Owners, Bell Owners and others. The gated estate community of the “Bayside Gables” is also located within the Bay Terrace neighborhood, being the site of some of the only single family homes in the area.[19] Bay Terrace overlooks the East River and the approaches to the Throgs Neck Bridge from the Clearview Expressway and Cross Island Parkway. The neighborhood is part of Queens Community Board 7 and Queens Community Board 11,[20] and is located within ZIP code 11360, bounded on the west by the Clearview Expressway, on the south by 26th Avenue and 28th Avenue, and to the east and north by the Little Neck Bay and Little Bay (which are a cove of the East River and a neighborhood, respectively).[21] The civic organization serving Bay Terrace is the Bay Terrace Community Alliance (BTCA).[22]

In 1639, Dutch Governor Willem Kieft (1597–1647) purchased the land that today encompasses Queens County from the Matinecock. William Lawrence (1622–1680), who served as a magistrate under Dutch and English administrations, was granted a parcel of land by King Charles II in 1645 that included a large portion of what is today Bayside, in addition to College Point, Whitestone, and Fort Totten. Bayside began its course of development from an agricultural community to a suburb when the North Shore Railroad was extended in 1866. During the following several decades, the Bayside Land Association purchased farms for development. Bay Terrace, originally included within the bounds of Bayside, remained composed of farms and large estates until the 1950s, when Cord and Charles Meyer sold their 225-acre (0.91 km2) farm for development.[23] By 1952, residential development of Bay Terrace Sections 1–12 began and continued into the mid-1960s. The Bay Terrace at Bayside Shopping Center was bui;t in the 1950s.[24]

The New York City Department of City Planning conducted a transportation study of Bay Terrace in 2004.[25] Findings included parking and intersection issues, including poor access to the Cross Island Parkway. Eventually, a median will be constructed along the length of 212th street, with increased access to the Cross Island Parkway near the Baybridge Commons Shopping Center and reconstruction of the existing entrance and exit ramps.[25] The Bay Terrace at Bayside Shopping Center plans on adding new storefronts to their plaza. including World Kitchen; Aéropostale; and PM Pediatrics, a state-of-the-art pediatric emergency care facility.[26]

Oakland Gardens is a middle class neighborhood in the southern part of Bayside, bounded to the north by the Long Island Expressway, to the east by Alley Pond Park, to the south by Union Turnpike, and to the west by Cunningham Park.[28] Whitestone is to the north, and Queens Village and Bellerose are to the south and southeast, respectively.[29] The neighborhood is part of Queens Community Board 11.[30] Fredrick Newbold Lawrence built a mansion in the area in 1847 called “The Oaks”, and the neighborhood’s name probably derives from that estate.[28] Many people refer to Oakland Gardens as “southern Bayside” because of its proximity and similarity to Bayside. Its Median income is $54,031.

Bayside’s Interstate Highways include I-295 and I-495, as well as the Cross Island Parkway. The north end of the Brooklyn-Queens Greenway is in Little Bay Park, under the Throgs Neck Bridge approaches, with convenient connection to the Utopia Parkway bicycle lane. It lies between Cross Island Parkway and Little Neck Bay, connecting Bayside to Douglaston and Alley Pond Park, and to central Queens and Coney Island. Francis Lewis Boulevard is a major street notorious for drag racing, which resulted in several fatalities to drivers and pedestrians over the years.[31]

Bayside is connected to Penn Station in Midtown Manhattan, other areas of Queens, and Long Island by the Long Island Rail Road‘s Port Washington Branch at the Bayside railroad station. Many also choose to take the New York City Subway‘s 7 <7> trains in nearby Flushing at Flushing–Main Street station.

After the MTA began extending the 7 <7> trains of the IRT Flushing Line westward into Manhattan in 2007, the 2012 fiscal year Community District Needs of Queens report suggests extending the line eastward in order to relieve congestion in Downtown Flushing. The report states: “It’s time for residents and businesses of East Flushing, Bayside, and maybe some parts of Douglaston to share in freeing Downtown Flushing from this growing problem.”[32] It should be noted the original plan for the line in 1935 was to have it end, not in Flushing, but Bell Boulevard near Northern Boulevard.

Local data from the Census Bureau’s American Community Survey (based on samples from 2005 to 2009) shows that the demographics of Bayside changes significantly from area to area. For example, the pocket bordered by the Clearview Expressway to the west, Northern Boulevard to the north, Bell Boulevard to the east, and 48th avenue to the south is 40% Asian, 26% Black, 21% Hispanic, and 13% White. Other areas can be up to 71% majority White, mostly inhabited by those of Italian, Greek, and Irish descent.[33]

Bayside contains 11,439 housing units. The majority of Bayside’s residents are part of family households representing 67.0% of all households with an average household size of 2.59. The median age of Bayside’s residents is 38.3 years and 15.0% of residents are over 65 years of age. 83.8% of residents age 25 and over have at least graduated from high school, while 35.0% have a bachelor’s degree or higher, making Bayside a more educated community than other American communities.[34][35] 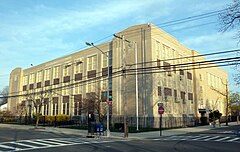 Bayside is home to Queensborough Community College, a branch of the City University of New York (CUNY) system.[37] The college is located on a 37-acre site that was formerly the Oakland Golf Club.[38]

Bayside is part of the New York City Department of Education‘s district 26, the highest performing school district for grades K-9 in all of New York City. The district includes 20 elementary schools and 5 middle schools.[39] District 25 also serves part of the neighborhood.

Shrine of Our Lady of La Salette